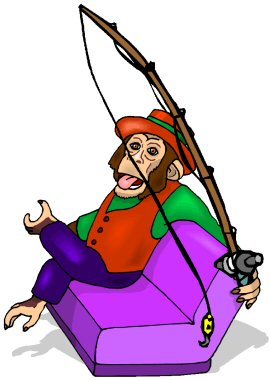 The article, Was The Missing Link A Tripping Chimp?, suggested that humans split from their chimp cousins 5-7 million years ago thanks to the psychoactive compounds contained in a particular root found on the plains of Africa. This band of psychedelic chimps eventually developed into the first hominids, and if you fast forward around 5 million years, you'd have likely found these early humans dwelling along the shorelines of Africa's prehistoric Rift Valley.

According to Dr. Stephen Cunnane, this was the point at which the human brain showed signs of "explosive" growth due to the iodine rich foods that they were harvesting from the waters and shorelines where they now lived. But this theory has proved a bitter pill for many anthropologists to swallow, who maintain the standard line that it was tool-use and language that activated the remarkable evolutionary growth of the human brain. While it appears to be a case of "which came first," nobody should be too hasty in throwing their hands in the air with bewildered indifference, as Dr. Cunnane presents a convincing argument.

It should be stated that while our brains weigh twice as much as our 2 million year old ancestor Homo habilis, the explanation for such massive growth still remains a divisive hot-button topic among anthropologists and evolutionary biologists to this day. One of the most controversial aspects of Dr. Cunnane's theory that really fires up the opposition is that humans became complete brain-boxes (well, most of us) by chance, rather than adaptation. It was by chance that early humans started eating the foods with the necessary minerals and nutrients that fed the already inherent potential for brain growth in early humans, reckons Cunnane. "Initially there wasn't selection for a larger brain," he explains. "The genetic possibility was there, but it remained silent until it was catalyzed by this shore-based diet." It is this hypothesis that forms the basis for Cunnane's book entitled Survival of the Fattest, published in 2005.

Cunnane argues that his theory casts doubt on the idea that tool use and language forced the brain to adapt and grow to accommodate these newly acquired skills. "Anthropologists and evolutionary biologists usually point to things like the rise of language and tool making to explain the massive expansion of early hominid brains. But this is a Catch-22. Something had to start the process of brain expansion and I think it was early humans eating clams, frogs, bird eggs and fish from shoreline environments. This is what created the necessary physiological conditions for explosive brain growth," says Dr. Cunnane, a metabolic physiologist at the University of Sherbrooke in Quebec.

There are some other factors related to tool use that add another supportive dimension to Cunnane's theory. As pointed out in Tripping Chimp, previous research showed that chimps simply don't have the brainpower to learn how to use tools as humans do. While early chimps could use basic tools such as sticks to pry out ants, modern chimps demonstrate that they have not advanced their tool making abilities one iota. It was also suggested that perhaps chimps learned basic tool usage from their tripping chimp chums. But researchers at the Yerkes Primate Center in Atlanta showed that an intelligent chimp called Kanzi could not be shown how to make an effective stone tool successfully, despite evidence showing that the earliest Oldowan tool-makers understood this principle. To make even the crudest form of tool, we'd have to accept that our ancestors had to have made a massive cognitive leap, which brings us back to Cunnane's hypothesis. Cunnane argues that it is the "metabolic constraints" placed on the human brain that represent the missing link between humans and our estranged chimp cousins.

Apart from being huge compared to our closest primate relatives, right from birth the human brain has an insatiable hunger for energy and the minerals and nutrients needed for growth, development and maintenance. Cunnane argues that this is why among all of the primates only human babies are born cute and chubby. With a newborn baby's brain consuming 75 percent of its daily energy intake, the extra body fat functions as a "built-in energy reservoir," says Cunnane. For a newborn's brain to grow to its full potential, a particular polyunsaturated fatty acid called docosahexaenoic acid (DHA) is required. It so happens that baby fat contains very high concentrations of DHA and Cunnane argues that the benefits of the surplus fat on early human babies provided the optimal conditions for "explosive" brain growth to transpire.

So, where did this surplus body fat come from? From their new shoreline diets, which included shellfish and catfish, Cunnane believes. "The shores gave us food security and higher nutrient density. My hypothesis is that to permit the brain to start to increase in size, the fittest early humans were those with the fattest infants." However, it seems debatable as to whether a mother's high protein diet explains the chubbiness of her newborn, or indeed, whether newborns at this time were carrying surplus pounds at all. In any case, Cunnane continues by saying that one of the advantages of having a shoreline diet was that, unlike Africa's hostile savannahs, it provided a constant nutrient rich food supply, which accommodated the inherent potential for human brain growth.

Cunnane knows that early humans settled in these shoreline areas, as associate Dr. Kathy Stewart's own excavations in East Africa uncovered numerous Homo habilis sites that contained a large quantity of catfish and other assorted fish bones. The significance of these finds is crucial to Cunnane's hypothesis in yet another way, as a rich aquatic diet is also high in iodine. "The evidence of the importance of key shoreline nutrients to brain development is still with us - painfully so. Iodine deficiency is the world's leading nutrient deficiency," explains Cunnane.

The result of iodine deficiency in its severest form is cretinism, which results in varying degrees of physical and mental impairment. In a recent edition of the Australian Medical Journal, Professor Cres Eastman explains how even children in prosperous countries run the real risk of suffering the consequences of iodine deficient diets. Eastman has campaigned for the distribution of iodized salt by law in many countries, such as Tibet, where cretinism is rife. Thanks to Eastman and others, iodine is legally required to be added to salt in more than 100 countries. "We've created an artificial shore-based food supply in our salt," says Cunnane. This observation together with the other evidence he has gathered has led Cunnane to conclude that: "It was the combination of abundant shoreline food and the "brain selective nutrients" that sparked the growth of the human brain."

Cunnane's hypothesis favors geographical location, a nutrient rich diet and an inherent potential for brain growth over natural selection and adaptation as being the instigators of explosive brain growth in humans. But his measured arguments also acknowledge the difficulties in determining whether it's nature or nurture that drives certain traits and abilities forward. Focusing on the "survival of the fattest" only seems to momentarily shift attention away from the obvious question of where this initial potential for brain growth came from, especially considering that humans seem to be the only ones that were endowed with such potential. When, and where, did this potential for brain growth come from?

While Cunnane's hypothesis appears strong, there's still the nagging question of why early hominids moved from their food abundant rainforests to the dangerous savannahs, and then later to the shorelines of Africa's Rift Valley. Cunnane claims that it was by sheer chance that they came across the right food source to cause massive, explosive brain growth. But could it instead be thanks to those psychoactive compounds? Maybe those original pioneering chimps wouldn't have begun their perilous journey unless they were all dosed up on mind-expanding substances.